The Jewish Public Library is happy to announce that the winner of our 2022 J.I. Segal Dr. Hirsh and Dvora Rosenfeld Award for Yiddish Literature is Michael Felsenbaum for his book A mesoyre vegn a freylekher libe-shmibe  (Critical Notes on Love: Yiddish Poems on Love and Life), a collection of sensual love poems in Yiddish. Mr Felsenbaum wins a prize of $1,000 which accompanies the award.

Here is the written speech Michael Felsenbaum sent us on learning of his prize:

Dear ladies and gentlemen, distinguished jury, dear community of readers, life, as you know, is full of surprises, and most of the secret surprises lie hidden among the lines of the enormous  treasure that belongs to the Jewish Public Library in Montreal, which means – in the Yiddish books. For me, for a stubborn Yiddish writer, who years ago decided to work as if I am reaching out to those six million Jews who were murdered during the last holocaust, to them and their children and their grandchildren, that is – as if the golden thread of Yiddish culture in general and the Yiddish language in particular had not been torn. And I am certain that when a writer puts into his words the living flame of his soul, which feels the beating pain of other people, then his voice will reach the uppermost heights of the seventh heaven and reach the hearts of the millions of Jews who dies for the sanctification of the Name and the sanctification of Yiddish.

My creative life is full of surprises and one of them is this year’s Segal Prize. The real surprise lies in the fact that, among the several literary prizes that I have received for my literary activity, I am receiving the Segal Prize for the second time, the first Segal Prize, the Hirsh and Gershon Segal Prize, I received in 1995 from the once-great I.L. Peretz publishing house and the I.L. Peretz Public Library in Tel Aviv. It was one of the most prestigious literary prizes at that time. The present Jacob Isaac Segal prize probably marks the end of my long journey in Yiddish literature. In a word, life itself gives us the kind of subjects which will demand from a word-smith years and years of difficult work in the literary field. With my whole heart I thank the Segal Prize jury for appreciating my literary work and also the readers of the Montreal Jewish Public Library and wish us all – even more pleasure both from the old, and from the new, Yiddish books. Blessings with a good and kind Yiddish word. Thank you. 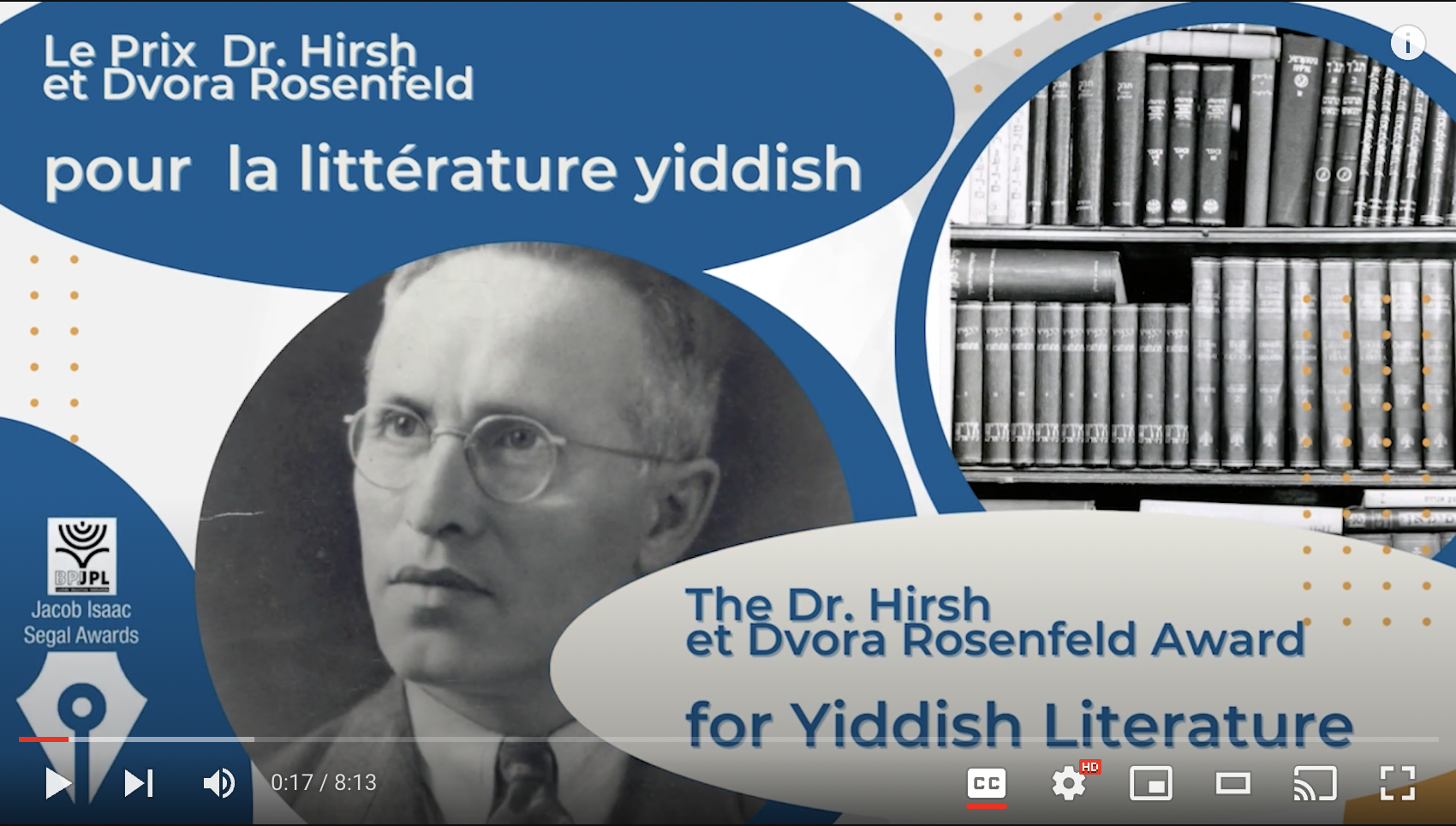 Note: turn on the closed captions (CC) to see subtitles while Michael reads his poem in Yiddish. Read an English translation of the poem as well as in the original Yiddish here.

Mikhoel Felzenbaum ( מיכאל פֿעלזענבאַום) is a Yiddish novelist, poet and playwright. Born in 1951 in Ukraine, he grew up  Florești, Moldova. He studied stage directing, theatre and art history  and worked as a Director in the national theater of Bălți where he founded the Jewish Theater.  Felsenbaum has published several volumes of poetry and prose in Yiddish and has programmes on the weekly Yiddish language series broadcast in Israel.

Congratulations, Michael, and all the nominees!