Back to Homepage
imglst newimghjpg The story begins ... Over the generations One brick after another The next chapter ... An open book on knowledge An inspired foundation The old works of the Library People of the Book Voices from the past

An open book on knowledge

From the foundation of the institution, one of its guiding principles has been the enhancement of the individual and the community through the quest for knowledge. This is how the founders created the Yidishe folks universitet (YIFO), a popular university. New immigrants and members of the community who did not have access to higher education could therefore benefit from continuing education. The courses offered covered different fields, such as ancient Greek philosophy, modern science, economics and history. After a temporary interruption of its activities, the YIFO was relaunched in 1940, under the leadership of the Yiddish poet Melech Ravitch. At its peak in 1948–1949, the institution hosted nearly 500 students. After the closure of the YIFO in 1954, the BPJ took over the spirit and objectives of the university by developing a multilingual and seasonal course program. 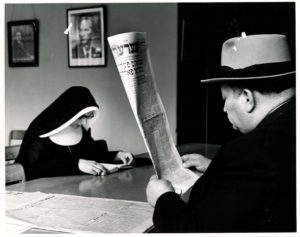 A cultural embassy in many ways, the Library also hosted lively discussions and debates as part of its lecture series. The Montreal Weekly Forumswhich the Library organized in conjunction with the Jewish Immigrant Aid Services (JIAS) were the most popular. These forums gave English-speaking, French-speaking and Yiddish-speaking Jews the opportunity to express themselves on a range of political and social questions, such as the linguistic debate in Quebec (1963) or Fidel Castro and the Castro revolution (1962). Speakers include historian Salo Baron (1960), of Columbia University, and David Lewis (1963), of the Co-operative Commonwealth Federation (now the New Democratic Party). The activist and journalist Gérard Pelletier gave a conference on the French language (1964) and Leonard Cohen discussed the future of Judaism (1963).

This commitment to knowledge and cultural interactions also continued outside the walls of the BPJ. In this regard, the digital collections of the BPJ are accessible to all. In addition, the history of Montreal is taught during school workshops offered to students. By continuing its long-standing commitment to donate books to hospitals and other organizations in Montreal, the institution is reaching isolated members through the mobile book service. In addition, families benefit from the BPJ through a collaboration between the institution and the West Island Jewish Community Center. The Library is a living and vibrant institution.

The next chapter … An inspired foundation