Between 2013–15 Rita Briansky began the process of donating her sketchbooks, photographs, and papers to the Jewish Public Library Archives, in addition to the sketchbooks, etchings, and other artistic works of her late husband and fellow artist Joseph (“Joe”) Prezament.

This exhibition marks the first time that Mr. Prezament’s sketches have been displayed, the largest display of Ms. Briansky’s sketchbooks, and the first time that the two artists’ work has been displayed side by side. The works of art included in the exhibit represent the unique approaches and processes of each artist while at the same time documenting the intimate artistic and domestic life they created together.

For over thirty-five years Rita Briansky and Joseph Prezament shared their lives and love of art. Each artist worked independently: Rita explored personal mythologies through her lived experience and surroundings; Joseph, with his keen sense of space and colour, created abstract allegorical visions and reflections of the city.

Joseph Prezament was born in Winnipeg, Manitoba in 1923 to Jacob and Rochl Prezament, both immigrants from Ukraine. Joe’s birth came just a year after his mother and siblings arrived to join his father Jacob in their new home; the family had been separated by immigration, war, revolution, and its aftermath for more than six years. Inheriting the artistic talent of his father – who was an engraver and sculptor of tombstones, an amateur inventor, and an occasional set designer for the Yiddish Theatre in Winnipeg – Joseph quit high school early to attend the Winnipeg School of Art. There he studied under Lemoine Fitzgerald, the only Group of Seven member living in Western Canada. 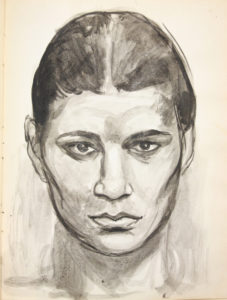 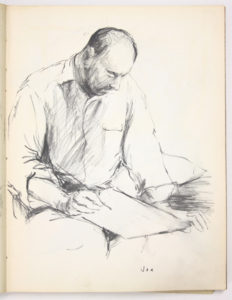 At the beginning of the Second World War Prezament joined the Canadian Armed F­orces and left the Winnipeg art school. Following the war Joseph again dedicated himself to his artistic practice, and in Montreal studied under Arthur Lismer and Goodridge Roberts at the Montreal Art Association, and Alfred Pinsky and Ghitta Caiserman-Roth at the Montreal Artists’ School. It was also in this period that Joseph and Rita first met: referred by a mutual acquaintance, Joseph contacted Rita to ask her advice on art schools in Montreal.

Rita Briansky was born in 1925 in Grajewo, Poland and at age four moved with her mother and two sisters to join her family in Ansonville, a Northern Ontario town where a small Jewish community had developed. Though Rita moved again to Val D’Or and in 1941 to bustling Montreal, her childhood in Ansonville is reflected often in her work. In Montreal the teenaged Briansky began to more actively pursue her interest in art. The Yiddish poet Ida Massey eased Briansky’s transition to the city, first finding Rita work so that she could afford school, and later introducing her to Alexander Bercovitch. Briansky began taking the artists’ classes at the YMHA on St. Urbain Street. From Bercovitch’s classes, Briansky moved onto further training at Montreal’s École des beaux-arts and New York City’s Art Students League.

Shortly after their marriage in 1949 the couple moved to Winnipeg, but they returned to Montreal after only one year. Joseph and Rita continued their creative careers, again immersing themselves in the tight-knit artistic community that had initially brought them together. Their friendships with fellow artists, such as Bill Charad and Mel Boyaner, were an important feature of Briansky and Prezament’s lives – not only personally but also artistically, as together the young artists formed a group called “The Art Workshop” that was active from the late 1940s through the 1950s.

During this period Joe also began working as a commercial artist, and was employed by large firms and printing companies. Despite having to balance his own practice with his working life, Prezament’s paintings and etchings were exhibited in galleries and shows across the country: the Vancouver Art Gallery, the Montreal Art Association, the Art Gallery of Toronto, and he had additional solo shows as well. A gallery of Prezament’s work also hangs at the Donald Berman Maimonides Geriatric Centre.

Balancing her domestic life with her practice during this period, Briansky worked from home where she also raised the couple’s two daughters. She later moved to a studio where her prolific artistic activity continued, as did national and international exhibitions of her etchings, drawings, and paintings.

In 1970, Joe began displaying symptoms of a then-unknown illness and in 1979 was diagnosed with a brain tumour. After this diagnosis Joseph retired from commercial art and concentrated only on his own art – finally he gave himself over to his true calling. Joseph Prezament passed away in 1983.

Following Briansky’s travels to her birthplace and various memorial sites in Poland in 1995 she produced the Kaddish series, which reflected on the traumas of the Holocaust. The artist also participated in multiple collaborative projects, including illustrating the children’s book On Stage Please (1977) written by dancer/choreographer Veronica Tennant. Briansky furthermore worked as a teacher of both art history and studio arts. Her practice has won her multiple awards, and her work is included in the permanent collections of institutions such as the National Gallery in Ottawa, the Winnipeg Art Gallery, and the Montreal Museum of Fine Arts. 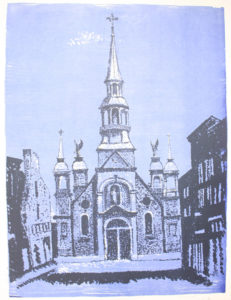 The Jewish Public Library thanks our generous sponsors for making Rita and Joe possible: