Voices from the past

The BPJ Archives are dedicated to the preservation of Canadian Jewish history, which spans 250 years. They preserve cultural artefacts attesting to the diverse origins of Montreal’s Jewish community. It contains correspondence, manuscripts, photographs and oral history documents. By collecting, classifying and making accessible these documents, the Archives participate in the mission of the BPJ as “an institution which administers and preserves the cultural monuments of the people”

The Archives were founded to preserve the manuscripts of Yiddish and Hebrew authors from Montreal, whose works enrich the shelves of the Library. Documents and literary productions spanning more than a century are thus preserved, such as the handwritten poems of J.-I. Segal and Ida Maze’s prolific correspondence. Since then, the Archives have broadened their mandate: they include many documents that touch on the history of the Jewish community. One of the earliest documents attesting to the Jewish presence in Quebec is a letter dating from 1775 and signed by Richard Dobie, a fur trader in Montreal, which describes his unsuccessful attempts to buy wheat from a Jewish merchant during Passover. 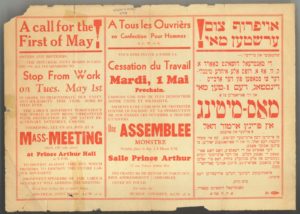 New waves of immigration have brought diverse cultural, social and linguistic traditions to Montreal. The Archives reflect this. The materials let us know about the many fraternal, political and philanthropic organizations that have supported the community by providing services such as health care and interest-free loans.

The Archives are the custodians of many life stories. Documents from well-known figures such as activist Lea Roback, impresario Sam Gesser and legendary baseball player Jackie Robinson are among the personal stories that have shaped the history of the community.

Through efficient finding aids and personalized research services, 1,000 linear meters of documentary material, 30,000 photographs and over 250 posters are available online for researchers. Long a repository of historical documents, the Archives are now accessible in schools and private homes thanks to digital technologies and collaboration with websites such as the Canadian Jewish Heritage Network ( www.cjhn.ca/en ). The Archives play an educational role that benefits the entire community.

Over the generations The old works of the Library