In 1914, Montreal was a booming city. Thanks to its vast clothing industry, it had become a preferred destination for a growing number of immigrants from Eastern Europe, whose arrival brought the city’s Jewish population to nearly 40. 000 individuals. By settling near the Main (Boulevard Saint-Laurent), they brought a panoply of languages, political ideologies and religious practices. Feeling the need to have their own social institutions, they founded a public library in order to cultivate the Yiddish language and culture, so vital to their community. From its inception until XXI e century, the Jewish Public Library (BPJ) has always provided a familiar space that meets the intellectual, creative and spiritual needs of the community. 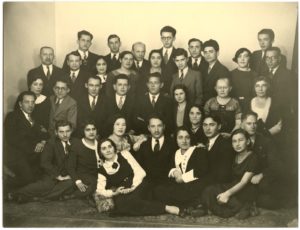 The Jewish Public Library was opened on 1 st May 1914 in a local modest located in 669, rue Saint-Urbain. She then had a small collection of 500 works. From the start, the Library was more than a collection of shelves and books. By maintaining strong links with the still prosperous Jewish communities of Eastern Europe, it quickly became a meeting place favorable to literary and cultural exchanges, to which was then added the Jewish People’s University, a training center. keep on going.

The Montreal BPJ developed from the reading rooms of several community organizations, including the Poale Zion, the Baron de Hirsch Institute and many synagogues. Yehuda Kaufman and Reuben Brainin, two strong voices in the community, have brought this ambitious project to fruition. The two men were able to count on a cohort of volunteers and groups who shared their desire to create a community space dedicated to literature and learning. Its success was based on a fundamental principle: the BPJ would be a library created by the people and for the people, regardless of the language, political affiliation or religious beliefs of its members.

Throughout its century-old history, the BPJ has responded to the needs of new immigrants through its collections, programming and services. During the 1960s, the BPJ welcomed thousands of Jewish immigrants from North Africa by offering them services in French. Successive waves of immigrants from Russia, France, Israel, Ethiopia and South America have also been welcomed by the BPJ. Today, its audience is as diverse as it was in 1914. For 100 years, the Library has witnessed hundreds of stories of the Canadian Jewish community. This exhibition recounts these stories from another century and evokes the promising future of the institution.