The old works of the Library

The rich past of Jewish Montreal and its ties to the Old World are preserved thanks to the Library’s collection of ancient and Judaic works. If this collection was established thanks to donations from mainly secular organizations, religious texts have always been important to the Library. The oldest works in the current collection are founding texts of the Jewish tradition written in ancient languages ​​of Asia, Europe and North Africa. 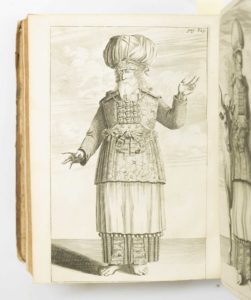 After the Holocaust, the Jewish Cultural Reconstruction Inc. organization was given the mandate to return Jewish books to their original owners. When these were not found, the books were sent to various organizations around the world. Thus, the BPD has acquired an important collection of

ancient books, the oldest dating from the XV th century. These works illustrate the historical and textual specificities of Judaism. The oldest work in the collection is an incunabula; it is about Judaic Antiquities(1481) by Flavius ​​Josephus. Many versions of ancient Hebrew grammars can be found at BPJ, as well as editions of the Bible, Talmud, Zohar, Responsa, and commentaries. One of the most astonishing works in the collection is a prayer book (c. 1780) handwritten on goatskin and bound with wooden plates. Written in Geez, a Southern Semitic language used for prayer, it was printed in Gondar province, Ethiopia. Only a few copies of this work exist in the world today.

In addition to these religious and ancient texts, the BPJ houses hundreds of works of memory (or Yizkor) linked to the Shoah. Often immigrants from the same place would come together to form landsmanshaftn in their host city., social support organizations for newcomers. After the Holocaust, some of these groups produced Yizkor. In Judaism, memory refers not only to memories, but also to the study and preservation of the past. Mainly written in the Yiddish or Hebrew language, these works constitute a precious resource for the children and grandchildren of immigrants, who can thus reconnect with the past. The BPJ owns nearly 600 “Yizkor” volumes, the only specialist lending library in the world with such a vast collection.

Voices from the past The next chapter …