People of the Book

Jewish culture and values ​​are intrinsically linked to writing. The book can be a creation, a religious text, or a source of stability and comfort during times of persecution. Thus, it has long been a source of spiritual wealth that unites individuals and the community. It is an opening onto the realm of the imagination and a center of knowledge. The Library’s collections make it possible to discover these worlds thanks to a plurality of genres, subjects and languages.

Since its inception, the Library has carved out an excellent reputation abroad. In 1915, the institution received the Yiddish comedian and author Sholem Aleikhem. Taking the opportunity to meet this legendary writer, a passionate audience gathered at the Princess Cinema on Sainte-Catherine Street. Since then, the BPJ has never ceased to welcome intellectual and literary figures from the Jewish world to Montreal. 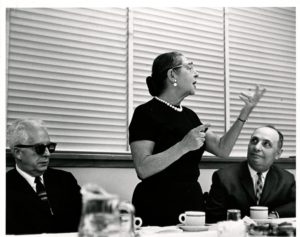 During the 1940s and 1950s, the Library became a center of creativity for the literary life of Yiddish Montreal. An informal group of poets and writers, including Ida Maze and Melech Ravitch, sustains an active cultural life. The place attracts renowned authors, who participate in public readings and discussions while encouraging the young readers of the Library. Over the years, writers such as AM Klein and Irving Layton have offered their support to the Library by signing articles in its publications.

Established in 1944, Montreal’s Jewish Book Month originally took place over a period of one week. It has long been the Library’s flagship cultural activity. In collaboration with other organizations, this popular festival hosting conferences, book launches and film screenings continues to grow. With its many activities that feature five languages, Jewish Book Month 2013 attracted more than 3,600 participants.

An open book on knowledge Over the generations