Among the users, the youngest readers discover the Alefbeys and the Latin alphabet (ABC) in the Norman Berman Children’s Library (BENB). Like the adult library, BENB offers children and their families books and documentation in five languages: English, French, Hebrew, Yiddish and Russian. The BENB is a lively space where toddlers can learn and have fun, from the age of six months! 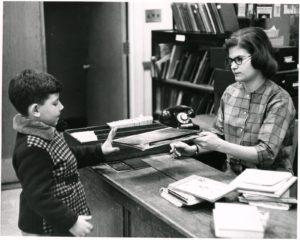 In ancient Jewish Montreal, the education of children and young adults was a priority; some of the earliest educational programs for children were developed by the secular school system in the Yiddish language. In 1920, children’s books represented more than 10% of the works available at the Library. In 1951, a donation from the family Naturman allows the new library

for children of Mr. and Mrs. meNaturman to move to his own premises and hire Shulamith Boxer, his first librarian. In 1974, this library was incorporated into the Chemin de la Côte-Sainte-Catherine library, thanks to a donation of books from the Children’s Library of the National Council of Jewish Women of Canada, housed at the Young Men’s-Young Women’s Hebrew Association. This new library is arousing such enthusiasm that the institution must open its doors a few weeks before the official scheduled date. In 1981, it officially took the name Norman Berman Children’s Library (BENB).

younger members of the Library are encouraged to share their own stories. BENB is a rich heritage of knowledge and tolerance that one generation passes on to the next.

People of the Book Voices from the past