For nearly 1,000 years, the Yiddish language has been an integral part of Ashkenazi Jewish life. Oral and community language in its infancy, Yiddish was such a development at the XVII th century, gave birth to a literature both religious and secular. Under the influence of the European Enlightenment, the Jewish Enlightenment (late XVIII th  century-XIX thcentury) saw, as early as the 1860s, the emergence of a modern Yiddish culture, which continued to grow until the start of the Second World War. In 1978, a little over a century later, Yiddish acquired great renown in the diaspora: the Yiddish writer Isaac Bashevis Singer received the Nobel Prize for Literature. Today, new generations continue to be interested in Yiddish. 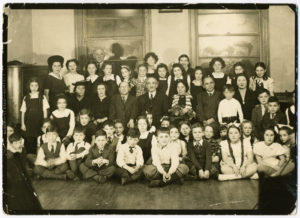 Among writers in Eastern Europe, the emergence of modernity generates a diversity of responses on the ideological, political and cultural levels. Modern Jewish ideologies, centered on “people”, “nation” and “culture”, reflected the spirit of the time; moreover, these concepts attracted the attention of many European countries. The renaissance of Hebrew as a modern language and the drive to elevate Yiddish to the rank of literary and national language were the highlights of this period marked by the development of a modern Jewish identity. As a lingua francaof the vast majority of Jews in Central and Eastern Europe, Yiddish became the vector of many political currents. The recognition and enhancement of the history, cultural heritage and language of the Jews then become a primary issue in these modern trends.

Each of these trends founds its own institutions: libraries, schools, theater associations, orchestras or newspapers. Libraries played a key role in their development and attractiveness. Jewish populations discovered world literature translated into Yiddish as well as emerging Yiddish and Hebrew literature. In Eastern Europe, these bookcases were very often housed in a cupboard at the back of a small room or in a private apartment; since they were illegal, they were often hidden.

To create a new world and participate in its development, every individual had to be educated. He had to know himself and understand his rightful role. The Jews of Montreal wanted to create a space conducive to the flourishing of Yiddish culture. The BPJ, or Di yidishe folks-biblyotek , cherished this wish, which dedicated members and leaders have passionately fulfilled, drawing inspiration from an era of limitless possibilities.

The story begins … One brick after another